Please join us in congratulating Dr. Tamara Bogdanović who was just elected to the Executive Committee of the High Energy Astrophysics Division (HEAD) of the AAS.

Every time two massive black holes collide, a loud chirping sound is broadcast out into the universe in gravitational waves. Humanity has only had the technology to hear these unusual chirps for the past seven years, but since then we have heard about 90 — during the first three observing runs. Featured above are the spectrograms — plots of gravitational-wave frequency versus time — of these 90 as detected by the giant detectors of LIGO (in the USA), VIRGO (in Europe), and KAGRA (in Japan). The more energy received on Earth from a collision, the brighter it appears on the graphic. Among many science firsts, these gravitational-radiation chirps are giving humanity an unprecedented inventory of black holes and neutron stars, and a new way to measure the expansion rate of our universe. A fourth gravitational wave observing run with increased sensitivity is currently planned to begin in 2022 December.

An international collaboration of scientists, including a team of Georgia Tech graduate students, undergraduate students, and faculty, has released the largest catalog ever of gravitational waves from cosmic collisions of black holes and neutron stars.

This week, LIGO–Virgo–KAGRA Collaboration published a set of scientific papers on their findings, which include the detection of 35 new gravitational wave events since the last release, in October 2020. That brings the total number of these observed events to 90 since the first one was detected in 2015.

Gravitational waves are ripples in space and time caused by black holes smashing into each other, or neutron stars colliding. Black holes are regions of extremely warped space-time caused by a very compact mass. Intense gravity prevents anything, including light, from escaping. Neutron stars are what’s left of massive stars when all their fuel has been exhausted; they become objects so large and dense (though not as dense as black holes) that atoms cannot sustain their structure as they do on Earth.

School of Physics and CRA Ph.D. student Snigdaa Sethuram has been selected by The Simons Foundation for the 2021 Flatiron Institute Center for Computational Astrophysics Pre-Doctoral Program.

The Center for Computational Astrophysics (CCA) at the Flatiron Institute is a vibrant research center in the heart of New York City with the mission of creating new computational frameworks that allow scientists to analyze big astronomical datasets and to understand complex, multi-scale physics in a cosmological context.

Snigdaa, who is part of Dr. John Wise’s Computational Cosmology group, will be working with 3 CCA mentors: Dr. Rachel Cochrane, Dr. Chris Hayward, and Dr. Shy Genel to build the neural network that will emulate the computationally intensive radiative transfer calculations that are traditionally done by high-performance computers on a select set of simulated galaxies. These calculations fully leverage all the simulated information and output observable properties of the galaxies while also significantly reducing the overall cost — enabling more regular comparisons of simulations to observations in the observer space, where the simulation informs the observable properties and not the other way around.

The CCA Pre-Doctoral Program enables graduate student researchers from institutions around the world to participate in the CCA mission by collaborating with CCA scientists for a period of 5 months on site. With this opportunity, Snigdaa and others will be able to participate in the many events at the CCA and interact with CCA scientists working on a variety of topics in computational astrophysics, thereby deepening and broadening their skill sets.

Congratulations Snigdaa, for this outstanding achievement!

A School of Physics adjunct professor who served as a founding director of the Max Planck Institute for Gravitational Physics (Albert Einstein Institute – AEI), helped spark the creation of the Center for Relativistic Astrophysics (CRA) at Georgia Tech, and laid the analytical foundation in the search for gravitational waves is now the recipient of top honors from the world’s oldest independent scientific academy.

Bernard F. Schutz, also a professor in the School of Physics and Astronomy at Cardiff University, has been elected as a Fellow to the Royal Society, the United Kingdom’s national academy of sciences. Schutz joins a number of distinguished individuals in his scientific discipline — Isaac Newton, Albert Einstein, and Michael Faraday, to name a few — as a Royal Society Fellow.

Schutz is honored and elected for seminal contributions to relativistic astrophysics, including driving the field for gravitational waves detection — ripples in time and space caused by violent and energetic celestial events, such as colliding black holes — research that helped lead to their direct detection in 2015. Georgia Tech played a direct and pivotal role in the analysis of the observed signal, and gravitational wave confirmations earned the 2017 Nobel Prize in Physics.

“My general reaction is one of pleasure and humility,” Schutz shares with the College of Sciences. “It is wonderful to be recognized for work that started 35 years ago and still continues, and it is humbling to be joining an academy that has such a distinguished membership.”

“It is a great honor to have professor Schutz as adjunct faculty to the CRA,” says Laura Cadonati, School of Physics professor, CRA director, and past deputy spokesperson for the Laser Interferometer Gravitational-Wave Observatory (LIGO). “His vision and advocacy have brought LIGO and gravitational waves to Georgia Tech, and made it possible for Georgia Tech to play a role in the discovery of gravitational waves and the exploration of the mysteries of the universe with this new messenger.”

The next HEAD (High Energy Astrophysics Division) Frontier Seminar will be held on Friday, April 16th at 1:00pm EDT (17:00 UTC). There will be three exciting talks by early-career researchers lined up, including CRA’s own Kunyang Li.

School of Physics professor Ignacio Taboada officially begins his term as the next spokesperson for the IceCube Neutrino Observatory — an NSF-funded South Pole facility searching deep space for sources of high energy neutrinos — on May 1, 2021. Taboada recently joined outgoing spokesperson Darren Grant for a Q&A about IceCube’s progress and plans. 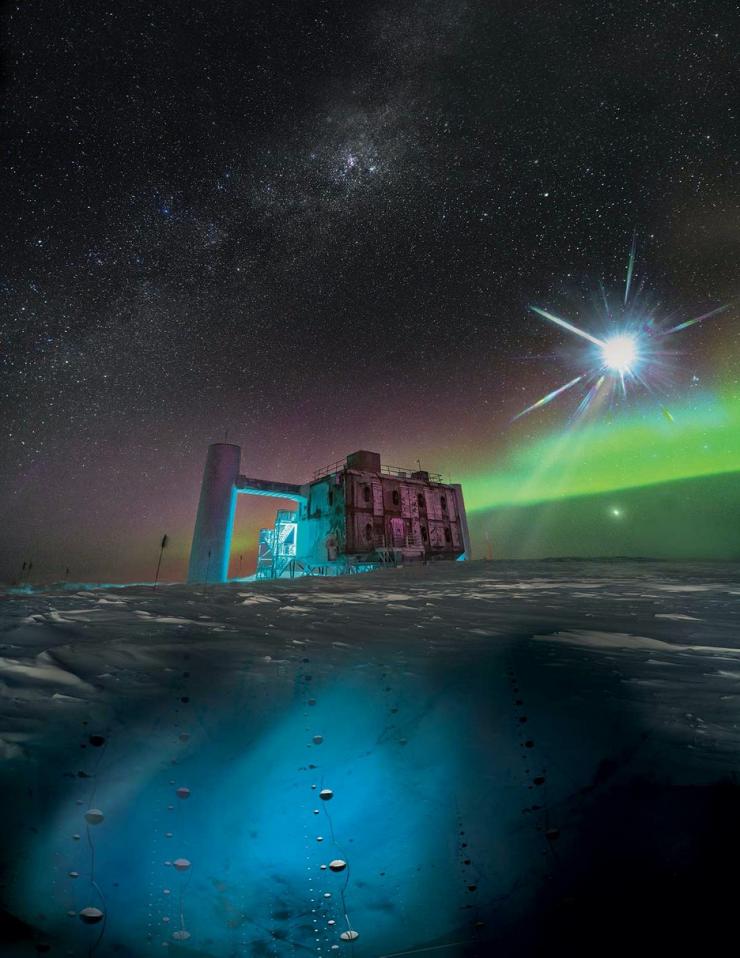 Ignacio Taboada, professor in the School of Physics and member of the Center for Relativistic Astrophysics at Georgia Tech, has been elected as spokesperson for the IceCube Neutrino Observatory, a collective of more than 300 scientists worldwide who work to detect neutrinos and other high energy streams of subatomic particles reaching Earth from deep space. The system of sensitive detectors — which takes up a cubic kilometer of South Pole ice — began in 1999 and has already yielded major discoveries about neutrinos, which are near massless subatomic particles that can travel unhindered for billions of light years from the most extreme environments in the universe to Earth.

Taboada joined AMANDA (The Antarctic Muon and Neutrino Detection Array), IceCube’s predecessor project, as a Ph.D. student in 1998, and has since added a number of major research responsibilities to his portfolio as IceCube has also grown. In 2017, Taboada and Ph.D. student Chun Fai Tung made significant contributions to the study of the first-ever detection of a neutrino in coincidence with a gamma ray flare from a ‘blazar’ — a type of galaxy with a super-massive black hole, in which a jet produced near the black hole points towards Earth. The blazar was the source of a high energy neutrino that set off IceCube detectors.

In recent years, researchers in the School of Physics at Georgia Tech have helmed a number of major collaborations and communications within the realm of astrophysics research and discovery — including the Nobel Prize-winning successful search for gravitational waves, through which a team of Tech’s astrophysicists joined thousands of scientists from around the globe in the LIGO (Laser Interferometer Gravitational Wave Observatory) detection effort. Laura Cadonati, professor in the School of Physics and the current director for Georgia Tech’s Center for Relativistic Astrophysics (CRA), has served as LIGO’s deputy spokesperson.

As Taboada, a fellow member of CRA, prepares to begin his tenure as IceCube’s spokesperson this May, he echoes that arc of leadership and the unique role that Georgia Tech and the School of Physics play within IceCube, LIGO, and other projects — and what that may mean for the future of other large-scale undertakings in this space:

“I think the relevance is that big science, as understood in terms of large scientific collaborations, is now clearly an important part of the scientific portfolio at Georgia Tech,” Taboada says. “If you look at the way that science has been changing within Georgia Tech, it’s clear that there are many changes for the better. The scientific output of Georgia Tech is improving, and improving over time. And I really hope that this is a sign of more things to come for physics and for science in general — and I really am very hopeful that Georgia Tech is going to play a big role within Gen2 (the next phase of IceCube’s development).”

It’s not just Saturn that sports some celestial bling; many stars have rings or disks full of debris surrounding them, all leftovers from the process of planetary formation. That includes our Solar System, with its asteroid belt between Mars and Jupiter, as well as the Kuiper belt, the thicker, donut-shaped disk of icy rocks and comets that lies just beyond Neptune.

Somewhere within those stellar disks are important hints about how planets formed, as well as clues to the history of their host systems. That search now includes Gongjie Li, Billy Quarles, and Nathaniel Moore, three School of Physics researchers who recently won a $523,145 grant from NASA’s Astrophysics Theory Program (ATP) to study so-called “stellar flybys,” where stars fly over those discs, changing their form, scattering other celestial bodies hither and yon, and possibly giving birth to solar systems like our own.

A stellar flyby “is a common process, since most stars form in stellar clusters with a high number density of stars nearby,” says Li, an assistant professor in the School of Physics. “As the stars fly close to the debris disk, it will gravitational pull disk particles and excite their orbits.

This changes the morphology of the disks, and the observed image of the debris disks could provide clues on the flybys and the formation environment of the planetary systems.”

CRA and School of Physics student Sudarshan Ghonge has been awarded the 2021 Gil Amelio Award for excellence in research by a graduate student. Sudarshan is a 5th year graduate student, working with Professor Laura Cadonati on gravitational wave astrophysics with LIGO. His research is focused on tests of general relativity and the connection between astrophysics and nuclear physics, by studying the signals from collisions of pairs of black holes and neutron stars. Time-frequency heat map of the gravitational wave signals from the first gravitational transient catalog (GWTC-1). Each panel in this poster represents one of the 11 gravitational wave events detected by the LIGO and Virgo detectors in their first and second observing runs from 2015 to 2017. On February 2nd, 2021 the Georgia Tech Library is hosting Dr. Jim Sowell and Research Services and Instruction Archivist Alison Reynolds for an exploration of and conversation about Sir Isaac Newton’s Principia and Opticks.

Get a virtual look at the Georgia Tech Archives copies of Newton’s Principia, which established the modern science of dynamics and serves as the basis for the modern study of physics, and Opticks, which provided our modern understanding of light and color. Participants will discuss intersections between rare books and science and why these works are pivotal to our current understanding of physics and astronomy.